For the 7th consecutive edition, the Music Festival, in French « Fête de la Musique », organized on the initiative of the Varna Francophone Center, will take place tomorrow, June 21, 2018 in Varna. What to know about this expected friendly musical event do no to miss ?

The date is never a surprise and rather simple to remember. Every 21th of June, also the first day of the Summer, a musical event takes place every where in France, in towns and villages, to celebrate Music since Jack Lang, then French Minister of Culture, created the « Fête de la musique » in 1982. The idea was to promote music in urban space. Since, every year, this music festival is held on 5 continents, in more than 120 countries and 700 cities.

Participation in the festival is entirely free for public, and open to professionals and also amateurs. The « Fête de la musique » mixes all musical genres and is aimed at all audiences, with the aim of popularizing musical practice and familiarizing young and old from all walks of life with all musical expressions. It is an opportunity to freely interact in music.

In Varna, the public will be able to enjoy two large stages, the « Rakovina » stage and the « Great stage » at the entrance of the sea garden, with instrumental and vocal performances from 4:00pm to 10:00pm. The management of the Rakovina scene will again be entrusted to Rock School Varna.

On the big stage of the Sea garden, the musical event will end from 9:00pm to 10:00pm with a concert of electro-jazz music by the 2 artists invited by the French Institute of Bulgaria : Siegfried, French pianist and Artis Orubs, Latvian drummer. 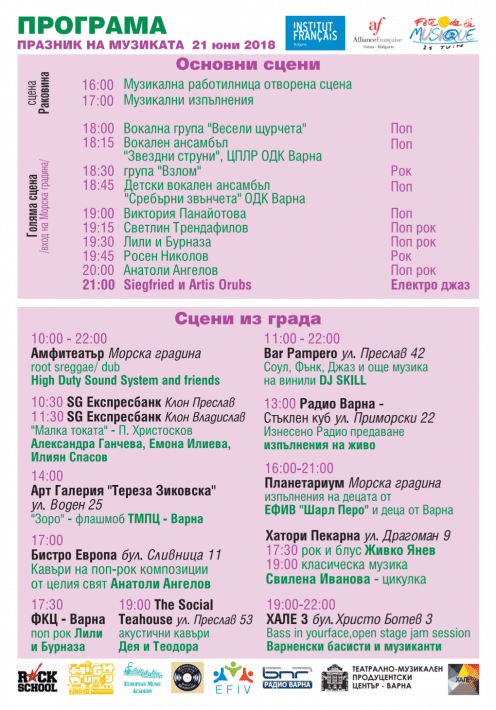 Other performances are organized in more unusual places for the locals : banks, restaurants, bars, shops, public squares, cultural places, public gardens, etc., as part of a parallel program, « Scenes in the city », whose aim is to bring the city to life with the sound of music and to make our everyday life lighter and more alive to different musical styles.

This year, the Fête de la Musique will find some musical areas in Sofia. S

Sofia : For this new edition 2018, it seems that Sofia, the Bulgarian capital, is also organizing the music festival « Fête de la musique » tomorrow. If you are in Sofia, inquire at your bar if it has planned to host a group.

"Ága" By Milko Lazarov Sacred In The Cabourg Festival