“It’s queer, it’s entertaining, it’s full of love for detail ». It’s HARTMANNMUELLER’s new performance piece, on the cover of this year’s edition of Antistatic Festival in Sofia, the Bulgarian capital. We asked the Duo 10 Questions about their upcoming show “my Saturday went pretty well until I realized it was Monday”.

As you already know, the Antistatic Festival is happening in Sofia, the Bulgarian capital, since the 9th of May. It will be running until the Tuesday 21th of May. We had the chance to ask some questions, exactly 10, to the duo Hartmannmuller, coming from Germany, about their show “My Saturday went pretty well until I realized it was Monday” which will take place this Monday 20th of May evening. Here’s what they told us. Come along as Madame Bulgaria discovers the fascinating details around this one-of-a- kind piece.

This year’s edition of Antistatic festival takes place in the context of the European Elections, under the moto #votefordance. How do YOU understand the #votefordance slogan?

Does your performance fit in the current context of European social unrest and the one of the European Elections? If yes how?

We deal in our piece with social structures, environmental issues and power relations. As a character, we chose the solo entertainer, who tells us what we should see. Who guides our view and tries to mislead us.

Your piece evolves around Shakespeare’s most popular character – Hamlet, his identity/existential struggles translated into today’s modern context of a delusional confusing world, right? Why did you choose this very emblematic storyline to express the struggles of the modern individual?

Hamlet’s figure is universal. His existential struggle is our struggle. It is easy to translate it in our context. We didn’t start our research with Hamlet. He appeared after a while and we thought to use him, his character could help us in our self-awareness. Everything that irritates us can lead us to an understanding ourselves.

The irony in the title of your piece combined with your picture version of Hamlet’s character make for perfect social media “meme”. So, what role does satire/humor play in your performance?

The two stylistic devices satire and humor are playing always a very big role in our performances. We don’t want to confront or convince our audience in a direct way. We play with these elements to bring our ideas and wishes closer or we give a chance to look at it in a different angle.

Which are some of the “clichés” and stereotypes that you exploit?

One character is truly the lonesome entertainer. He plays his role for ever. Never changes something. He is a puppet of the pop culture. The other person is the young Hamlet. Constantly working on his mother. Just as we work on the important questions of this world again and again. In the end, we are just as smart as before.

And, to what extent does your choreography actually fit into the contemporary dance context of Antistatic?

We think our performance is not a usual contemporary dance show. We scratch on the lines of performing arts. It is queer. It is entertaining. It is subversive against our society. It is brutal. It is loud. It is full of love for detail.

Yes of course, dance includes all body expressions! Movement is everything – your body is in constant motion. This is dance! Over the past few years performance became a dance form. It is hard to distinguish between dance and performing arts because basically there is a big fusion of the two art forms. To categorize dance and performing arts would make it smaller again. It is beyond limits.

The musical aspect plays a big role in this piece. It leads and guides through the evening. It supports the performer. It is also the simplicity of it, what attracts us. It needs not so much of composition, it is more about the drive and the timing and use of the music itself.

To what kind of audience do you think that your performance appeals?

What about the Bulgarian public, what would you tell them if you had to convince them to come see it?

We would say – if you want to experience a journey through pop culture and extreme body art, you should come and see our show!

It’s great to perform at the Antistatic Festival in Sofia. It’s our first time here and we are very happy to be part of it. We hope to meet a lot of nice people and to get in touch with the Bulgarian art scene!

Thanks a lot for this interview !

Madame Bulgaria is a webzine (Magazine on the web with a personal touch) with the aim to show how Bulgaria is a very nice country, full of potential and really promising. We cover all kind of topics as objective as possible. Offering a new, fresh and dynamic content on Bulgaria, we work every week to relay what you absolutely must not miss. Enjoy ! 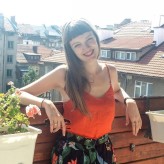 Lidia is what you might call "a citizen of the world" who believes in travelling as a way of life but always returns to Bulgaria, the place where she feels home.